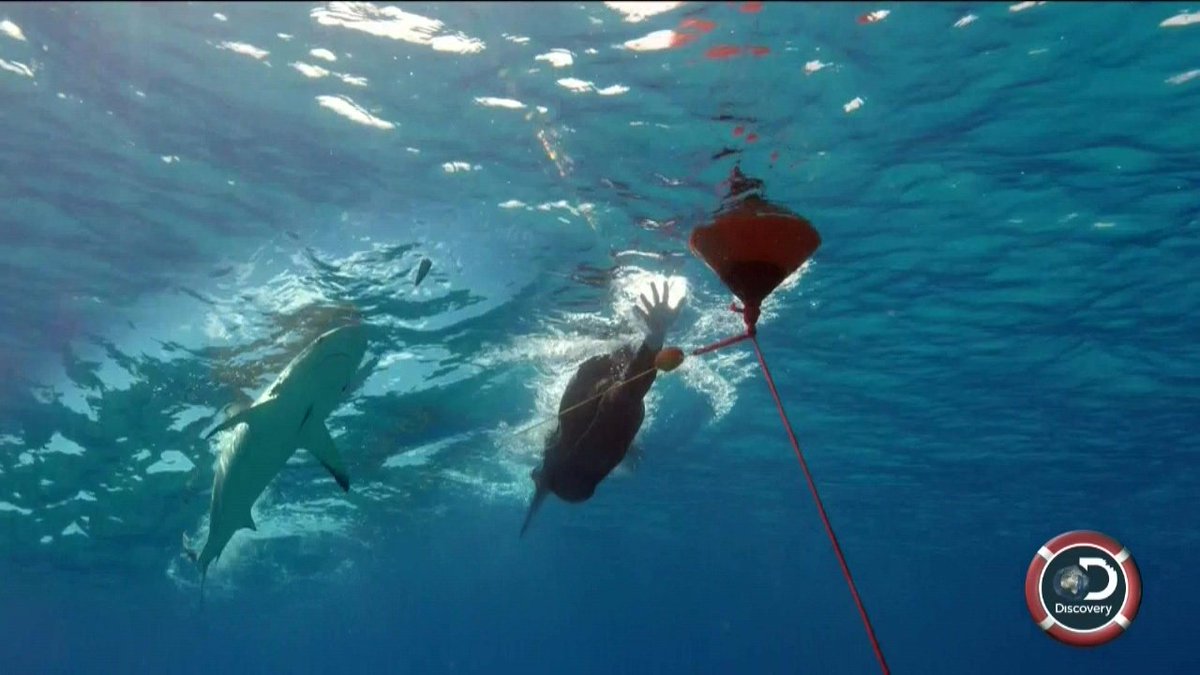 Discovery Channel kicked off its annual ‘Shark Week’ programming Sunday night with one of the most anticipated television events of the year: Phelps vs Shark: Great Gold vs Great White. The special program was billed as a one-of-a-kind race pitting the world’s best (human) swimmer against one of the ocean’s top predators. But viewers expecting to see the 28-time Olympic medallist swimming against an actual great white shark were disappointed when they were told the race would feature a simulated shark instead of a real one.

For several reasons, not least of which was safety, a head-to-head race was simply not possible. Instead, Phelps raced against computer-simulated sharks whose swim speeds were based on scientific data collected by a crew of scientists and producers.

“Naturally, we can’t put Michael in one lane and a white shark on the far lane,” said Tristan Guttridge, one of the scientists in the production team 57 minutes into the program. “We’re going to have to do a simulation.”

Much of the program featured Phelps and his team chasing sharks in two locations—the Bahamas and South Africa—so that they could record their average speed for use in simulated races. Measuring how fast a shark can swim 100 meters is not as easy as it sounds because it is very difficult to get a shark to swim in a straight line. 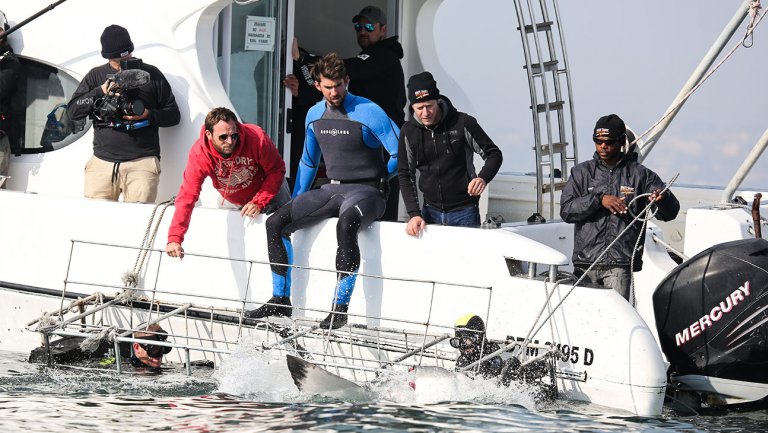 To obtain speed data, the team used a ‘cutting-edge water vehicle prototype’ in the shape of a bicycle-powered pontoon boat. A courageous crew member pedalled the vehicle and towed a seal-shaped decoy in front of actual sharks to measure their time.

To prepare for the race against the great white, Phelps swam two 50-meter warmup races against a hammerhead and a Caribbean reef shark. Wearing a custom wetsuit designed to mimic a shark’s skin to reduce drag and increase his swimming speed, he also used a monofin to give his kicks an extra boost.

Surprisingly, Phelps bested the reef shark with a time of 18.7 seconds compared to its 18.9 seconds. He did not beat the hammerhead, which swam the distance in just 15.1 seconds.

For the main event, the production team decided to extend the race to 100 meters. This would help give Phelps a better ‘swimming chance’, as one producer put it. A longer distance worked in Phelps’ favor because, although white sharks can swim up to 40 kilometers (25 miles) per hour, they do so in short bursts and must slow down to conserve energy, instead of maintaining the same speed over time.

Phelps swam the race solo, time-trial style. Using the speed data collected earlier, the scientists created a computer-generated image of a shark racing alongside Phelps in a makeshift lane in the open ocean off the coast of Mossel Bay, South Africa. The result was a dramatic feat of television engineering. 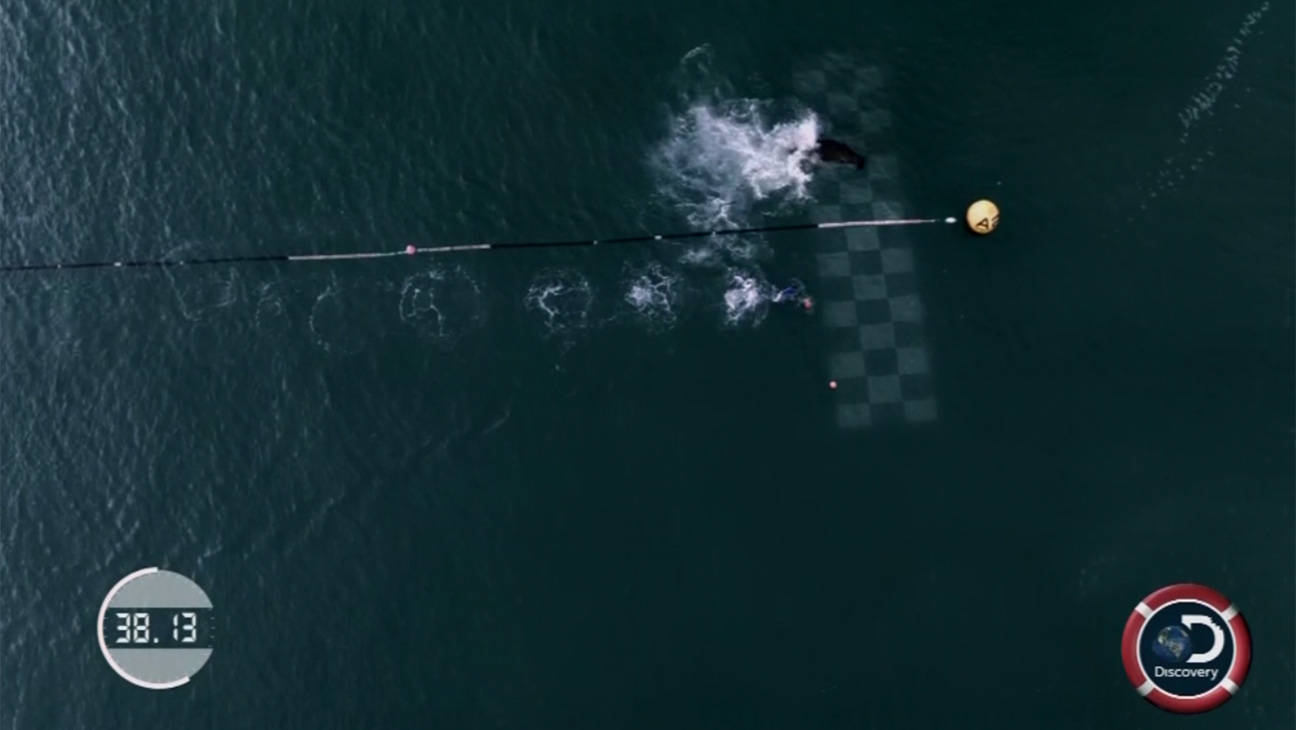 Predictably, the simulated white shark emerged victorious, posting a 100-meter time of 36.1 seconds. Phelps clocked in at 38.1 seconds. When considering that great white sharks can travel up to speeds of 40 kilometers (25 miles) per hour while the average human can only swim around 8 kilometers (5 miles) per hour, Phelps’ time was impressive and the race surprisingly close. If this were an actual competition, he would have smashed the world record for 100-meter freestyle by almost 10 seconds.

While the human vs wild aspect made for good TV, some viewers were upset, claiming that they were sold a bill of goods that were not delivered. Many expected the race to be more realistic and were blindsided by the revelation that Phelps would be racing a CGI shark.

For those who were paying attention, Phelps made clear in interviews before the show aired that he would not be swimming side-by-side with the shark. “We’re not in the water at the exact same time,” he said in an interview with the hosts of Good Morning America on July 20th. “I think that’s the one thing we all—we want everyone to know—I was safe, which was number one.”

Nonetheless, Discovery Channel failed to mention that in most of its advertising and the hype created around the event had a lot of viewers expecting more.

Shark Week is still on Discovery Channel every evening until Sunday 30 July.