Dive and Dine in Okinawa

Dive and Dine in Okinawa 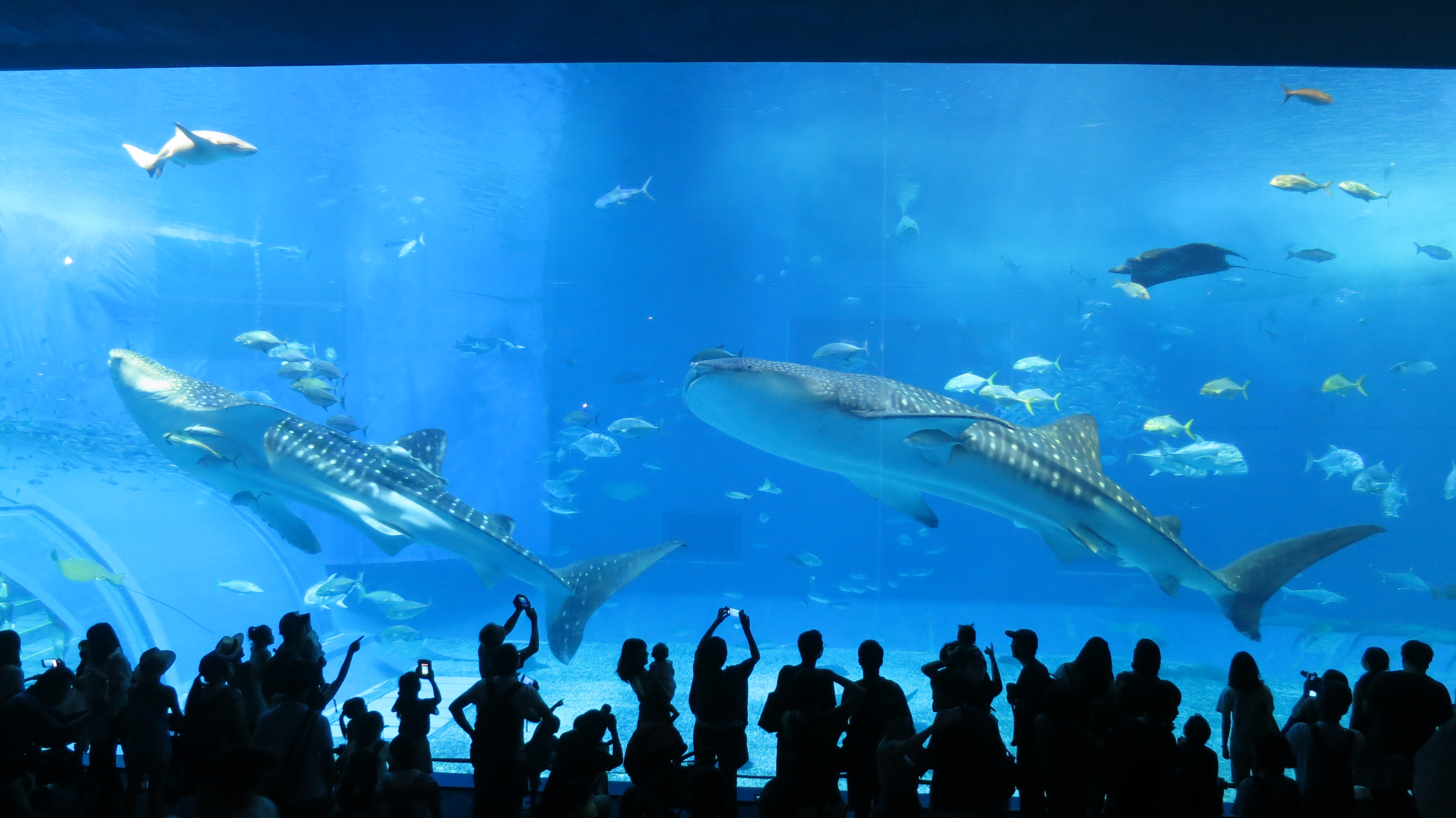 If you fancy the mixture of Japanese and American culture, you definitely don’t want to miss Okinawa. Early Okinawan history was formed by the Ryukyu Kingdom, and lasted until the annexation by the Japanese Empire in 1870s. Later, during the invasion of Japan during World War II, the US military fought a battle to occupy Okinawa as a major base for troops. Numerous U.S. Army, Marine Corps, and Air Force bases still remain nowadays, even after Okinawan sovereignty was returned to Japan.

Set aside the historical background, and you may still enjoy the subtropical islands as a tourist simply looking to enjoy yourself. Here are some must-go attractions.

"Chura" means "beautiful" or "graceful" in the Okinawan Japanese dialect, and "umi" means "ocean" in Japanese.  It was once the largest aquarium in the world. Among tanks containing deep sea creatures, sharks, coral and tropical fish, the main one, which has a volume of 7500 cubic meters, keeps whale sharks and manta rays alongside many other fish species. The marine life appeals to both children and grown-ups. You just can’t stop watching the beautiful creatures gliding through the water.

The aquarium offers a variety of programs led by guides or caretakers, including tank talks and feedings. The exhibition texts/labels are written in several different languages, but you may deepen your marine knowledge from the talks at the aquarium only if you understand Japanese.

With more leisure time to spend, take a wander in the Ocean Expo Park, which holds not only the aquarium but also a selection of other activities such as dolphin shows, a Native Okinawan Museum, Oceanic Culture Museum, Tropical Dream Center, and a Tropical & Subtropical Arboretum to a historic village.

Snorkeling/Diving into the big blue

If you can only pick one dive site in Japan, it must be around the Okinawa Islands, the world-class dive paradise where crystal clear waters allow divers to truly appreciate its stunning underwater seascapes, either via beach diving or boat diving. The most famous spot on the main island for snorkeling and diving is ‘Blue Cave.’ Sunlight passing and shining through the seawater creates a blue reflection that illuminates the cavern. 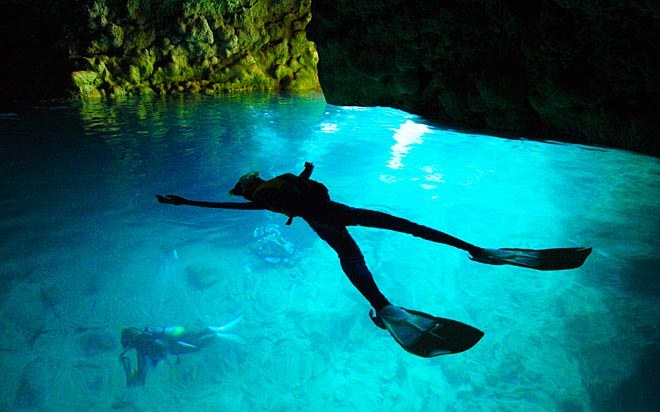 Sunlight passes through the seawater and creates a blue dreamworld. Photo: The Okinawa

However, I had no chance to see that wondrous scenery above the surface because I chose a scuba diving tour. The site we visited was way too popular and crowded. The dive guide took us deep down into the cave. Later on I realized only snorkeling tourists would experience the sightseeing because they float up top, while divers are meters below the water’s surface with deep blue surrounding them.

For those who would like to preserve your dive memory with pictures, view past photos taken by the diving instructors in advance. It would be lucky for you to have a dive partner who happens to be good at photography. Otherwise, you are likely to feel disappointed due to pictures with bad framing.

You will also have the unique chance to swim with whale sharks, but they are in captivity rather then being free in the ocean. Both snorkelers and scuba divers are accepted. You can feed the giant creature under the instruction of dive guides, but touching is not allowed.

Hopping on a boat to go on whale watching tours in winter is another exciting encounter. Humpback whales spend the summer in Aleutian waters, then migrate thousands of miles south to the warm waters of Okinawa for seasonal breeding. Bring binoculars to catch these beauties in action, watching as the enormous mammals breach, tail slap the water, or exhale air from their blowholes right in front of your eyes.

All tours recommend participants contact the operating companies the day prior for travel and weather updates. The Blue Cave diving tour (free underwater photos and videos included) costs from $75 to $135. Some diving centers provide English or Chinese service.

A visit to the street is virtually essential for tourists in Okinawa. Kokusaidori (literally ‘International Road’) is lined by restaurants, bars, hotels, shops, boutiques and department stores, stretching two kilometers through downtown Naha. You may need at least two hours to walk around. 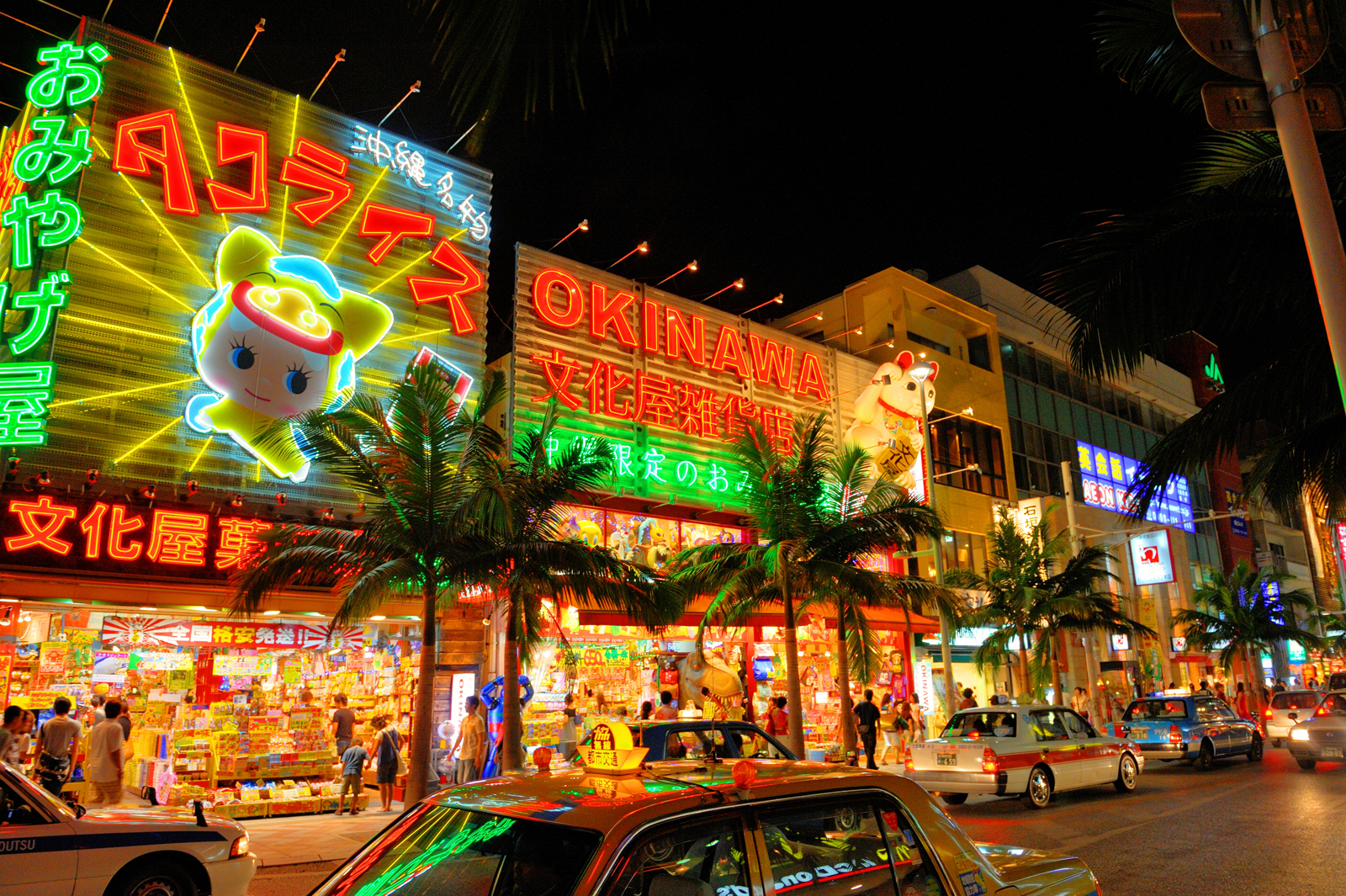 Kokusai Dori is packed with shops and restaurants. Photo: OIST

The street is no less appealing to the more mature and independent tourist. If you go for real bargain shopping with cheaper products, try Heiwadori, Mutsumidori and Ichiba Hondori arcades, which branch off Kokusaidori around the intersection with Okieidori, halfway along the street. Some stores accept credit cards for payment, but most deal only in Yen.