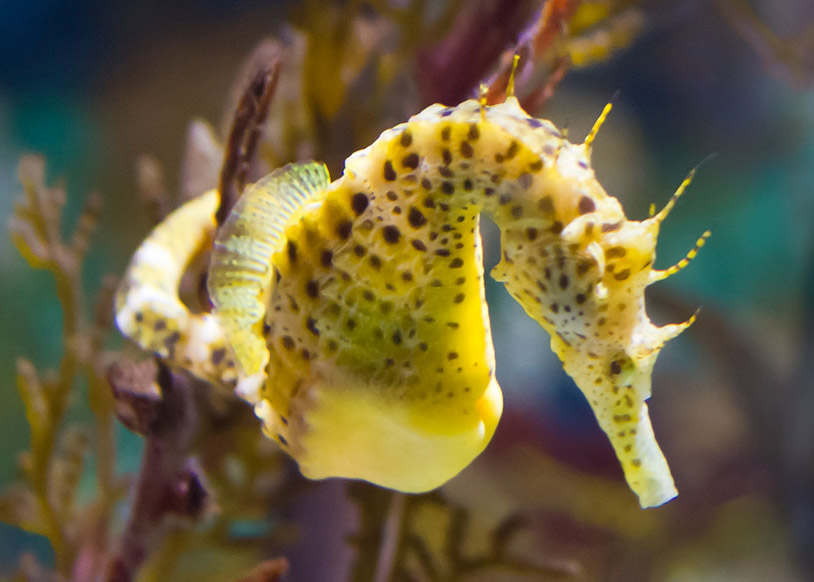 Father’s Day, or Father’s Days around the world, as they’re all different dates, are right around the corner and a great time to think about what your father has done for you in your life. It’s one of many times a year that people get together with their families, share food and drinks, and celebrate, but with the catch that it’s all about dad. But, there’s a special father of the sea, and that’s why this Deepblu Original is dedicated to the noble seahorse.

Seahorses, like any other animal, mate, reproduce, bear young, and then do it all over again. The cycle, like with most, continues, life goes on, and it will go on until the event of extinction. But, there’s something special about seahorse fathers. Now, before I get into it, think about the most amazing thing your father ever did for you or gave to you, whether it’s the night at the ballgame or that interesting arrangement of your eyebrows. There’s a lot a father does for a child.

But, was your father ever pregnant?

Okay, well, I’m not going to say that it’s the whole truth, but male seahorses, while not technically pregnant in the way that humans get pregnant, are the ones who carry the young until birth in their species. Now I’m no scientist, just a guy who loves the ocean, so bear with me here. What goes down, as far as my limited knowledge goes, is that the male part of the species produces the sperm and fertilizes the egg, but after that the fertilized eggs are shot into the male by the crafty female part of the species, who then goes about on her way to, well, whatever female seahorses do.

There are many theories as to why this happens, the most common being that it decreases competition for mates within males. Safe enough, nobody is going to be mating with a male seahorse with a pouch full of eggs. While the male is full of eggs, which subsist predominantly on what’s contained within the yolk, they also provide the eggs with lipids and calcium through a spongy tissue they develop to ensure the nourishment and safety of the young.

After a time, the eggs hatch in the male’s pouch, and the female returns daily to greet him. This occurs day after day until the magic moment when up to 2,500 young burst out of the seahorse and into the ocean, which frankly sounds exhausting, and in fact it is, with the male consuming more oxygen and using far more energy than before the incubation period. Sometimes after this occurs the couple part ways, although some species remain monogamous; however, there is one constant among all seahorses, the few young that survive are on their own.

So when you sit back with a cold beer this or next weekend, depending where in the world you are, give it up for the seahorse guys. They’re perhaps the hardest-working men on the entire planet, because in addition to all the tail whipping and head butting that males of every species do, they also become the primary force in the miracle of birth.