Next Flight to Nowhere: Dive with Napoleon in Saint Helena

Next Flight to Nowhere: Dive with Napoleon in Saint Helena 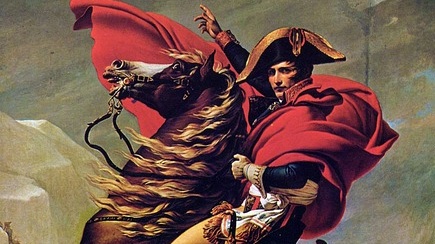 Follow his lead, all the way to Saint Helena.

Napoleon felt so taken aback by the beauty of the volcanic island of Saint Helena that he was at a loss for words. It was a dream vacation, well, a nightmare really, as he was banished there at the end of his despotic rule and forced to live out his days surrounded only by those who chose to be around him. A surprising number for a failed emperor, actually, somewhere around ten.

The loss of words? Well, that was mainly the hiccupping, coughing, and groaning that encompassed his last forty days on this Earth, until approximately six o’clock on the evening of May 5th, 1821. This is when the once powerful leader yawned, and slipped away forever.

But great news for divers!

This historic site, turned tourist destination and vacationer's haven, turned object of affection for divers, is soon to become more accessible than ever. Currently it takes about five days to get to the island by boat, but come the end of this week you’ll be able to get there by the first scheduled flights to the island, ever.

St. Helena, rarely dived but frequently talked about, is home to several wrecks from the past couple of centuries which, themselves, are home to a diverse array of wildlife and infinite possibilities of exploration that would make any emperor excited.

Waterloo? Lost. New water to dive? Found! The coral covered wrecks are home to crayfish, anemones, sharks, and a colorful array of schools of fish that come for the soft currents and mild tropical waters. On the land one can find the island's 4,600 inhabitants, as well as hiking trails, biking trails, and simple nature walks that the famously small (but not actually small) tyrant may have used himself.

While there is no commercial dive center on the island at this time, regularly scheduled flights at the new airport, as well as a thirty-room luxury hotel, are sure to bring more people out to see the nearly untouched spots. Until then, however, there is the fifty year strong St. Helena Dive Club, who are sure to be a force, but as of press time have a website that’s not quite complete yet.

In the past, in addition to locals, these waters have been explored by adventurers such as Jacques Cousteau, who clearly had the time, money, and resources to take a dip so far out of the way. Cousteau claimed to be astounded by the sheer number of specimens in the untouched waters, and that’s important to note. While we can, should we take up the chance to dive in untouched waters? As a community, this needs to be handled responsibly. With proper care, attention to environmental standards, and cooperation with locals who are about to have an influx of visitors unlike any in the past couple of centuries, this could be an overwhelmingly positive experience for all involved. Most importantly, the marine life.

So if you’re in South Africa and looking for an extremely remote getaway, hop on the Johannesburg flight outbound to Namibia as a connection to St. Helena, and perhaps Napoleon will finally feel like he has a bit of company.