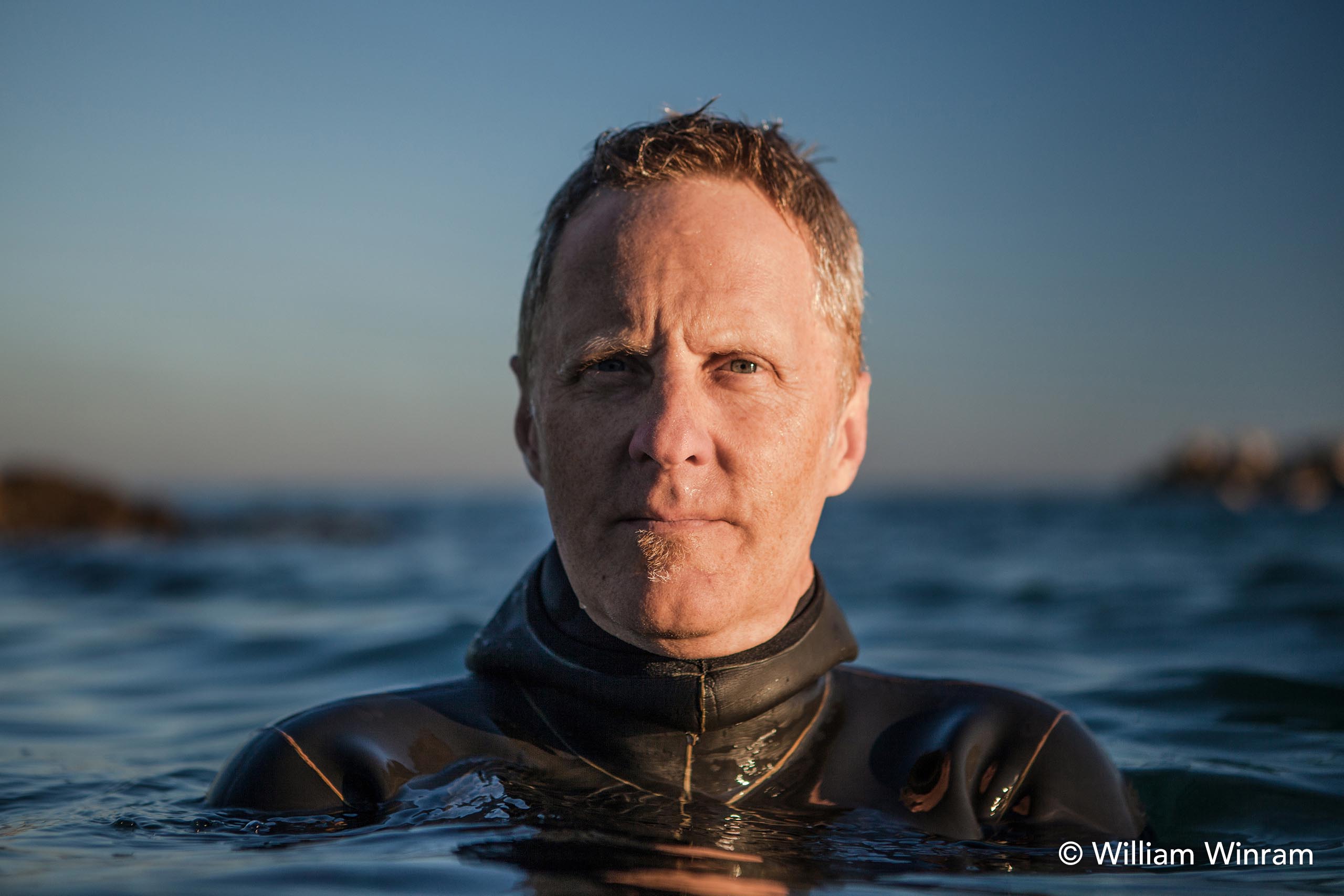 William Winram was only ten years old when his father threw all his diving equipment—mask, snorkel, fins and weight belt—off the dock and into the sea, 12-meters (40 feet) deep. “Dive down. Put it all on. Clear the mask and surface,” his father dared him.

Up for a challenge, Winram tried desperately to swim down to retrieve his kit, but could not understand why he was unable to descend past the surface. After failing the first couple attempts, his father told him to exhale to see what would happen. Heeding his father’s advice, he exhaled, dove down, and retrieved his weight belt first. Next, he donned his mask, cleared it, grabbed his snorkel, and swam up to the surface.

Winram had passed his first freediving test. It would be the first of many.

“It was a test that was, perhaps, a little bit extreme,” Winram recalls, “but it was a good test of competency in the water before donning scuba equipment.”

Winram has been freediving since the moment he was strong enough to hold onto his father’s neck in the pool. While he did not get into competitive freediving until later in his life, he arrived prepared to succeed. Everything he did up until that point, from competitive swimming and spearfishing to Tai Chi and meditation, gave him the mental and physical training that equipped him to become a world-class freediver.

When he did start to freedive competitively, Winram quickly became one of the top-ranked athletes in the freediving world and began setting records left, right and center. Since then he has changed his focus to marine conservation, lending his personal stature and life experience to the cause that is dearest to his heart: shark conservation.

A Life in the Water

If there has been one constant in Winram’s life, it is a lifelong connection to the ocean. His father, a welder and locksmith by trade, doubled as a search and recovery diver for the coast guard and taught scuba diving and freediving on the weekends. William and his brother would sit patiently by the side of the pool as their father gave his lessons, waiting for the opportunity to hitch an underwater ride on their father’s back as he swam from one side of the pool to the other.

Winram started diving with a snorkel and fins in Hawaii when he was six years old and, by the age of nine, was the proud owner of a custom wetsuit fit for diving in the cold Canadian waters. It was this wetsuit—a quarter-inch (6 mm) thick—which kept him buoyant during his fateful first freediving test. Winram’s father passed on his passion for the sea by teaching his kids the aquatic skills that allowed them to participate in all kinds of watersports. After learning how to swim and dive, Winram’s father taught him how to spearfish. They would use paddle boards to search for a good spot and then jump in and go hunting for fish. Winram also got into surfing and kayaking as he grew older and, eventually, scuba diving as well.

He was a competitive swimmer from a young age, which helped him to further his abilities in the water. As part of the training program his swimming coach introduced meditation. Unable to sit still at the time, Winram was bored with the meditation and his coach suggested martial arts instead. This is how he started to learn Tai Chi, which helped develop his mental preparation, as well as the ability to focus and tune out external influences. Years later, Winram studied Ba Gua, another Chinese martial art, further improving his mental control as he learned to meditate for extended periods of time. While useful for him as a swimmer, these skills would come in even more handy later in life.

In 2004, Winram was visiting a spearfishing shop while on vacation in Hawaii when he came across an advertisement for a freediving training course that piqued his interest. While already an experienced freediver, Winram had never done any formal training and was unaware of the world of competitive freediving up until that point. After speaking with the owner at the shop, he was convinced to do a basic training course.

Winram was clearly very comfortable in the ocean and proved to be an exceptional freediver. On only his second training dive, he got to 33 meters (108 feet), hanging there for longer than 3 minutes. He finished the day with a dive to 45 meters (147 feet).

Winram noticed that, mentally, freediving was similar to his experience with Ba Gua. “I entered this profound, deeply meditative space but was still present,” he says, “I experienced that just through the pressure of the ocean while at depth.”

Winram was immediately hooked and started training with the instructor for an upcoming competition that was taking place in Hawaii. Winram placed in the top three at that competition, surprising himself, and qualifying for the upcoming world championship being held in Switzerland and France. At the world championship, Winram placed in the top 10 in three of the four disciplines he competed in.

“Imagine what I could do if I actually applied myself,” he thought to himself. Thus began his career as a professional freediver.

Rise to the Top

Winram began to train hard and competed at the 2006 world championships in Egypt. He finished as the top-ranked male in the competition. The more he trained and competed the more he started setting national (Canadian), continental (North-American) and Pan-American records in multiple disciplines. From 2006 to 2011 he set at least one record a year; in some years, he set as many as seven.

After just under two years of training as a competitive freediver, Winram attempted the unthinkable: diving the 60-meter (196 feet) deep and 30-meter (98 feet) long Arch in the Blue Hole of Dahab, Egypt on a single breath and without fins. On that dive, Winram had the urge to breathe at 25 meters (82 feet), much earlier than normal. He faced the choice of continuing or turning back. He made the decision to push forward and he became the first man to successfully complete the dive, a historical feat that no one would be able to wrest away from him.

From the very beginning of his career Winram was chasing records and pushing the limits of the sport, but he was continuously limited by issues with equalization at deep depths. In 2010, he sat down and made a list of his strengths and weaknesses as an athlete, and decided to focus on confronting his challenges equalizing. He started researching articles on the subject and consulted with a top expert in the field, to come up with a training program that would help him overcome his equalization problems.

The hard work paid off in 2013, which was the biggest year of Winram’s competitive career. In Roatan, Honduras at the world cup, he overcame his equalization problems to set the world record for Constant Weight with Bi-Fins after diving down to 94 meters (308 feet). Later that year, in Sharm-el-Sheikh, Egypt, he secured another world record in the Variable Weight category at 145 meters (475 feet).

Throughout his life in and on the ocean, Winram had noticed changes that disturbed him. The main change he noticed was a reduction in biodiversity in the areas where he regularly dove. Put simply, the fish were disappearing. He noticed these changes before he started competing as a freediver but once he became a high-level athlete, he realized he had a platform to convey a conservation message to the public and he decided to act.

The best way to help was to volunteer his breath-hold skills and another of his unique talents: freediving with sharks outside of the cage. Winram had begun diving with sharks years before, after a surprise encounter with a tiger shark while spearfishing. He wanted to show people a different side of the animals.

“Sharks are not harmless,” Winram says, “but they aren’t psychotic killing machines either.”

He began volunteering for scientific organizations, specifically those focusing on shark research, and supporting their activities by freediving with sharks and using a modified spear-gun to place satellite and acoustic tags that help scientists track their movements. In addition to tagging, Winram began photographing and filming himself and other divers diving with sharks as a way of presenting an alternative to the common narrative in the media, that sharks are dangerous, bloodthirsty man-eaters. 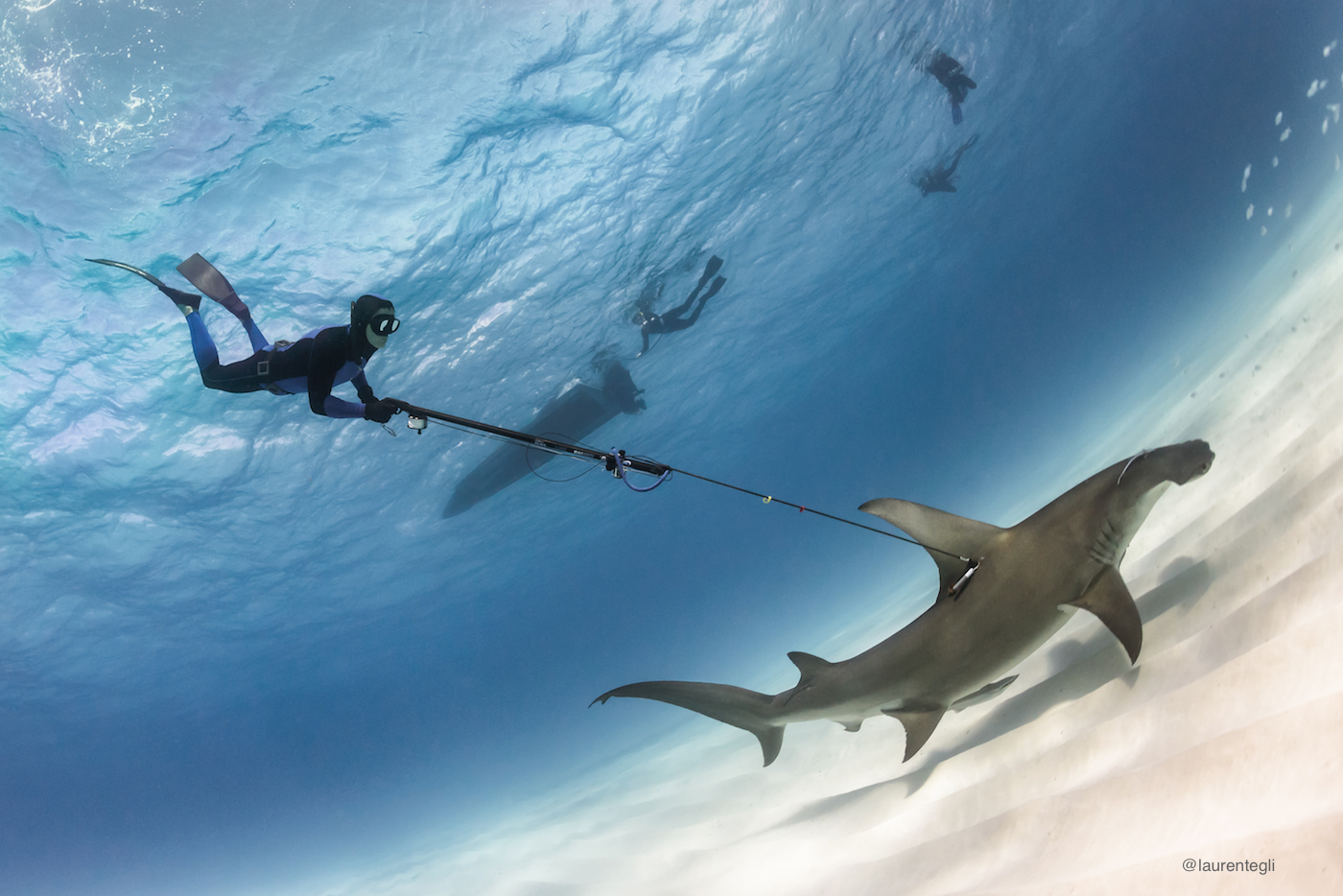 As a freediver, Winram can get up close to sharks because he blends into the marine environment. He does not have to wear bulky scuba equipment, and does not scare away the sharks with the noise of the regulator and bubbles. Also, he understands their behavior after years of diving with them. It also helps that freedivers are much more agile in the water.

“The skills I learned hunting underwater have lent themselves to photographing subjects but also approaching them and placing tags,” he says.

Winram believes that one of the biggest challenges faced by marine conservation movements is engaging the public. So, when Winram isn’t photographing, filming, placing tags or taking tissue samples, you can probably find him giving public presentations and talks on shark behavior and conservation. He is active on social media, using it as a tool to educate the public about shark behavior and the scientific work he supports.

“My purpose now is to engage people about the plight of our oceans,” he says, “and how we need to change our relationship to our planet to ensure that we continue to exist as a species.”