Put Your Scuba Dollars to Good Use

Put Your Scuba Dollars to Good Use 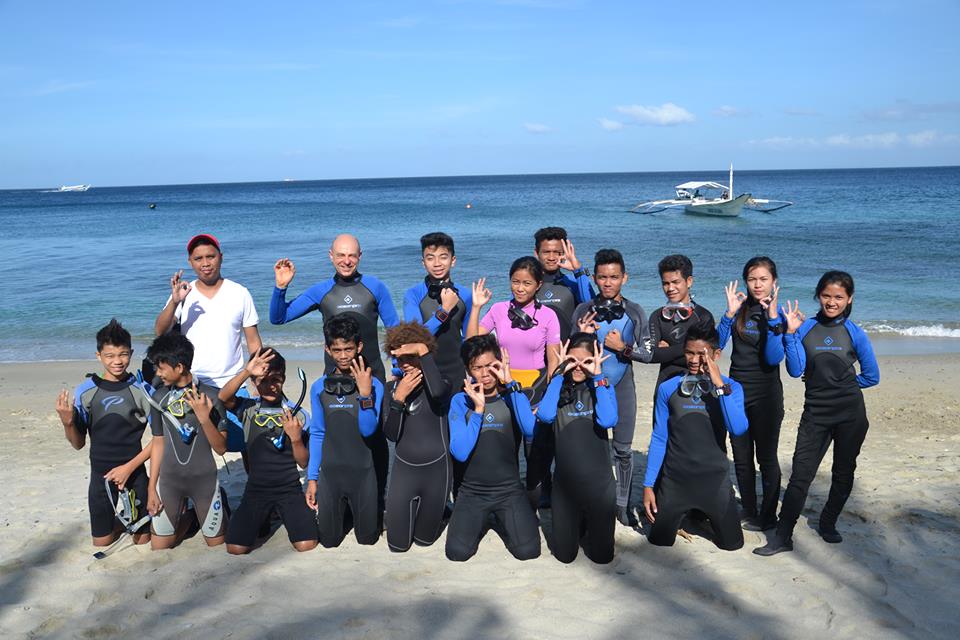 Scuba for Change’s social enterprise model is changing the world for the better.

When Albert Li was traveling through southeast Asia in the mid 2000s, he came face to face with the realities of poverty and child exploitation. In Cambodia, he witnessed children and young adults forced to do horrific things, selling their bodies as prostitutes and begging for money on the streets. On the same trip, though, he also saw someone doing something about it. A restaurant owner took kids off the street and fed them. He provided them with place to live, helped them receive an education, and taught them life skills. In short, he helped to break the cycle of exploitation and provided them a chance for a different path.

Many years later, Li was diving in the Maldives at a dive shop owned and operated by locals. It was the best diving experience he had ever had, and it “broke the mindset that only Westerners or foreigners can run safe and reliable dive operations in developing countries,” he said. He realized that he could do the same thing as the restaurant owner in Cambodia, but in the world of scuba.

These experiences served as the inspiration for Li to create Scuba for Change: the world’s first social enterprise dive operator. Founded in February 2015 on the picturesque beach of Aninuan in Puerto Galera, Philippines, Scuba for Change is a PADI dive center that has foregone the profit motive in exchange for a charitable one. As the name implies, Scuba for Change seeks to create social change and contribute to the betterment of their community. The company pledges to reinvest 100% of their profits back into the local economy to empower local people to build their own self-sustainable future by providing jobs and funding programs that specifically target child exploitation.

Tourism leakage is a major problem in southeast Asia, with estimates that up to 70% of revenue generated from tourism being remitted to foreign investors. “Each year, tourists and scuba divers alike spend billions of dollars whilst traveling and, typically, only a small percentage flows back to local communities and local people,” Li said.

Scuba for Change hopes to combat this trend by adopting a ‘zero tourism leakage’ model, where all revenue generated from the diving operation remains in the Philippines. The goal is for the company to donate 50% of its profits to a local charity, invest 40% of profits in the future growth of the social enterprise, and devote the remaining 10% to an employee profit sharing program. 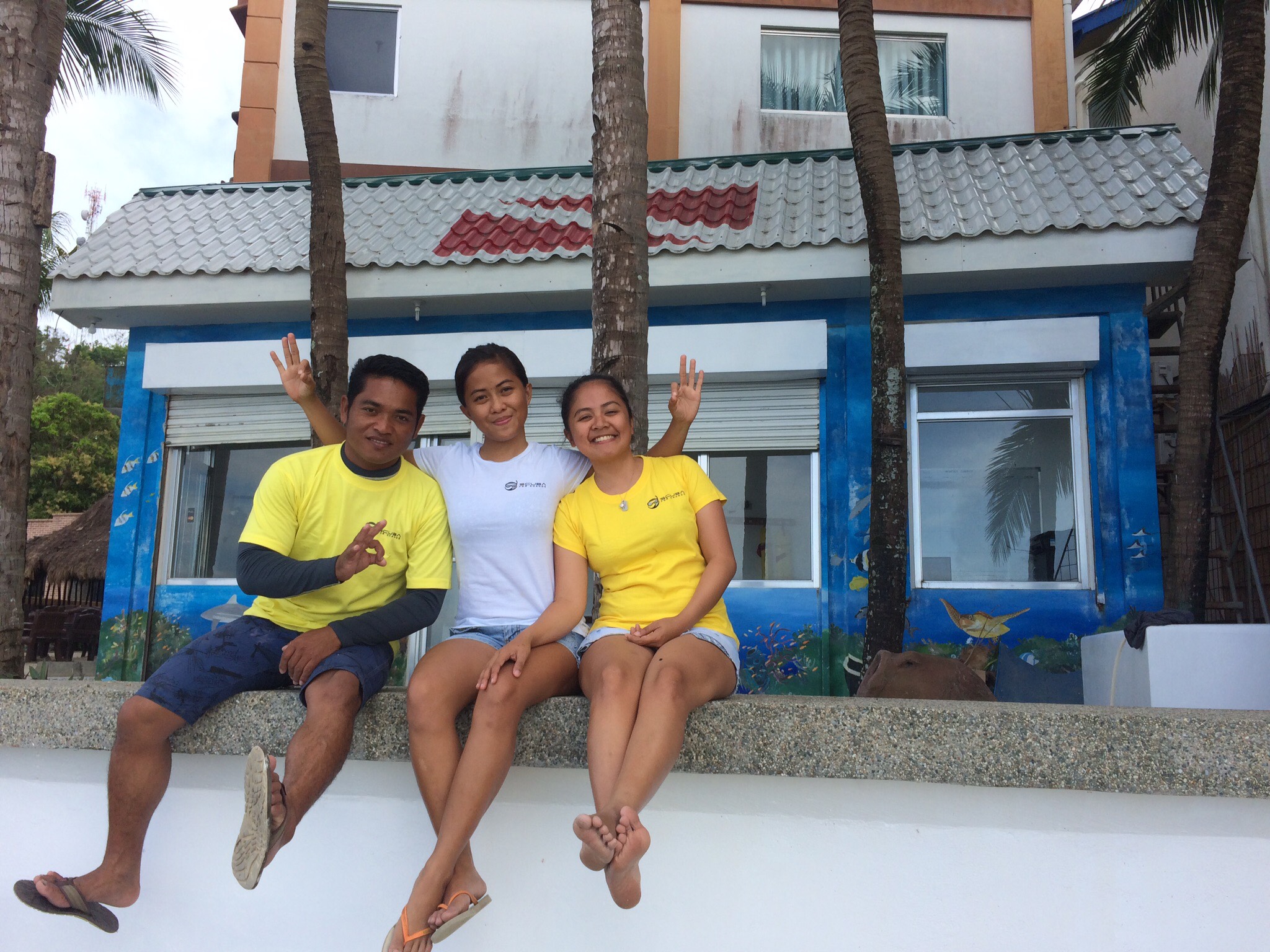 The Scuba for Change team in front of their dive center in Puerto Galera, Philippines.

By Locals, for Locals

A key part of this model is having the dive shop managed by locals, not foreigners. Julienne Evangelista was the first Filipino employee of Scuba for Change. Hired in March 2015 as an office worker, she has worked her way up to general manager. Scuba for Change funded her Divemaster certification and instructor course. Now she oversees the day-to-day operation of the business and conducts certification courses herself.

“Scuba for Change has given me an opportunity that I never thought I would get,” said Evangelista. “I want to share that with the kids who will eventually work at Scuba for Change.”

Similarly, Grocian Delarosa began working as a dive shop assistant, filling tanks, cleaning equipment and helping guests. Now he is Scuba for Change’s main dive guide, tasked with taking customers out on daily fun dives. In addition to sponsoring his Divemaster certification, Scuba for Change has paid for tutoring lessons so that Grocian can improve his English. 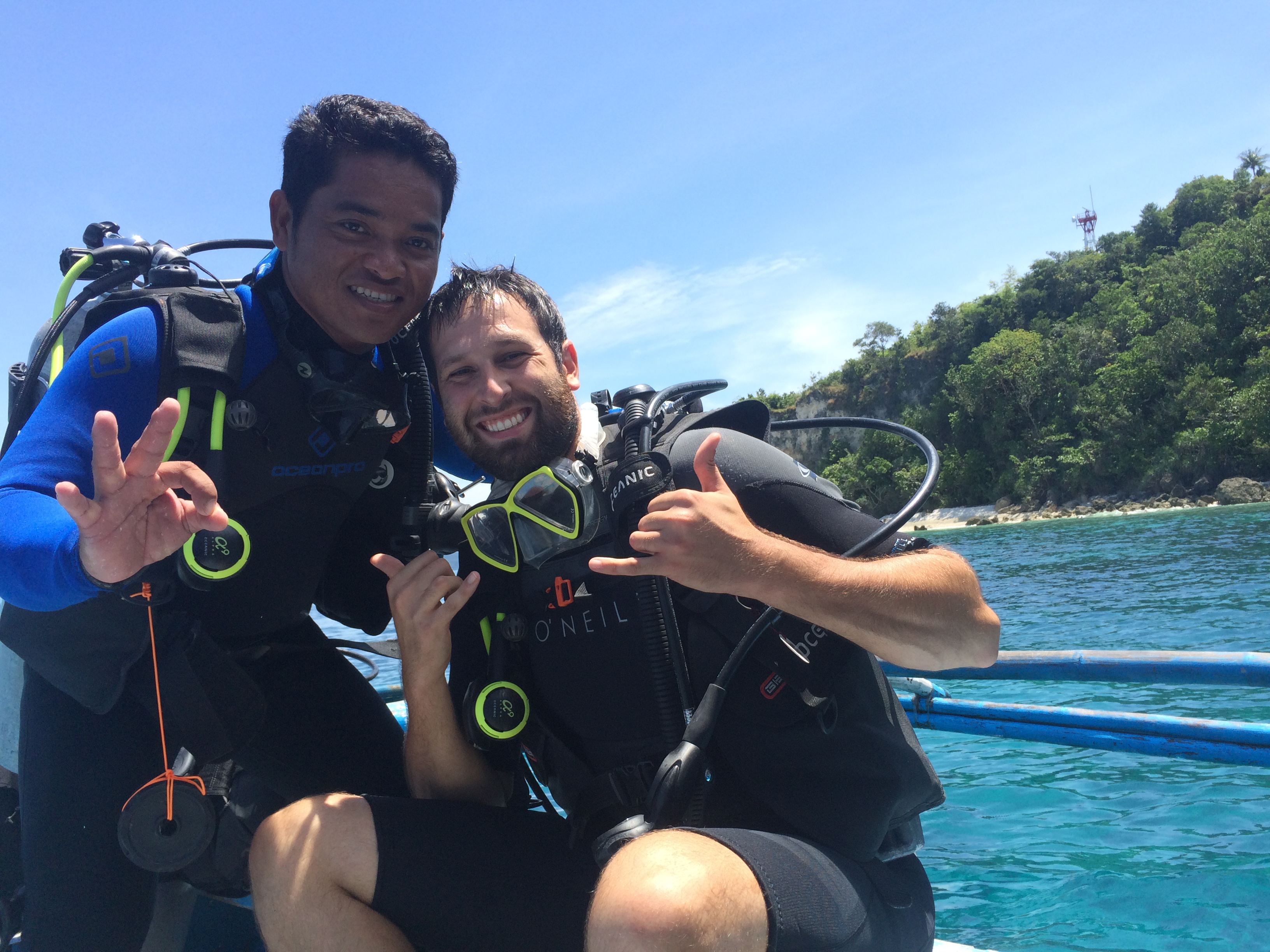 This satisfied diver is all smiles after a fun dive with Divemaster Grocian Delarosa.

A Stairway to a Better Life

Scuba for Change partners with The Stairway Foundation, a non-profit child care organization with a 25-year history of helping marginalized children and youth. Located just a two-minute walk from the Scuba for Change dive shop on Aninuan beach, The Stairway Foundation’s Learning and Resource Center is a sprawling camp running several programs aimed at promoting and protecting children’s rights. Each year, they take in 14 street children from Manila to help educate and rehabilitate them as part of the Family Home program. Additionally, they provide educational assistance to over 300 students from extremely poor families in Puerto Galera and operate a feeding program for indigenous children in a remote mountain village.

A year later at the second Change for Children event, 11 youth got their open water certification. Those kids got to do their first fun dive in January of this year when Scuba for Change organized an ocean cleanup event. The team collected over 30 kilograms of garbage in and around the Aninuan House Reef, everything from plastic bags and bottles to clothes and snack wrappers. 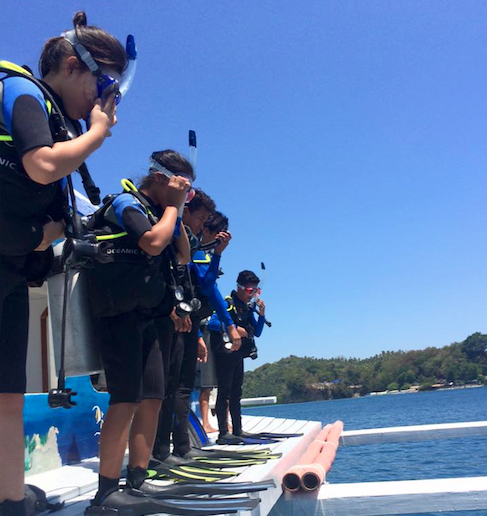 Youth from the Stairway Foundation get ready to make a giant stride before a training dive for their Open Water Diver course.

Scuba for Change is currently in the process of creating a Dive Academy. The purpose of the dive academy is to “provide a pathway for marginalized young people a way out of poverty through education, livelihood training and job opportunities.” Scuba for Change will provide the human and training resources to train Dive Academy participants to the Divemaster level or beyond. As Divemasters, they will be able to generate a reasonable income and livelihood.

A Model for the Future

Scuba for Change’s social enterprise model sets a great example for dive businesses that are perfectly capable of giving back to the communities in which they operate. Just like any other scuba business, Scuba for Change faces a challenge of awareness. “Our model only works if we can sustain a profitable dive shop and then invest the profits back into the local community,” Li said.

The combination of doing business and doing good is something that is very attractive to the next generation of socially-conscious divers. In fact, the philanthropic mission of Scuba for Change serves as one of its unique selling points. By diving with them, divers are doing what they love and at the same time donating to a great cause.

What You Can Do to Help

There are many ways get behind and support Scuba for Change. First, choose Scuba for Change when you go diving in Puerto Galera. Puerto Galera is a world-class diving destination with a wide range of different dive sites, ranging from healthy coral reefs to shipwrecks. It’s especially popular as a destination for underwater macro photographers. Second, help them spread the word by following them on their social media channels and sharing their posts. Finally, you can donate to their cause and help them in their journey to create positive and lasting legacies.

To learn more about Scuba for Change, visit www.scubaforchange.com