If you’re lucky enough to be in Australia at the moment, you’ll be happy to discover that there’s a great night of conversation, discovery, and underwater photography coming your way.

Dubbed “The Underwater Tour,” National Geographic legends David Doubilet and Jennifer Hayes, along with photographer William Tan, are coming to speak about their adventures under the sea. With dates in Brisbane, Sydney, Melbourne, Adelaide, and Perth, there are plenty of opportunities to catch them around the nation.

Having logged 26,000 and 11,000 hours under the sea respectively, Doubilet and Hayes have a combined  repertoire of work that is arguably unmatched by any other.

Doubilet’s work has spanned the globe, and landed him over 75 features in National Geographic. His work spans the polar ice to coral reefs and all that is in-between. In addition, he’s hosted National Geographic Live and has worked on 12 books. A recipient of several awards as well as a member of the International Diving Hall of Fame, his voice is massively respected in the world of underwater enthusiasts.

Hayes’ marine science background combined with a life of conservation work has led her to some of the best regions on Earth for photography and journalism. With an eye for detail, she carefully documents the horrors of climate change for creatures big and small, including ourselves. Hayes is a recipient of the President’s Medal as well as a Shark Research Institute trustee and Explorer Club National Fellow. She’s currently working on documenting UNESCO World Heritage coral reefs.

Also appearing will be William Tan, who specializes in blackwater macro underwater photography. He captures the phototaxic movement of plankton and other small sea creatures. In addition to his accomplished photography career, he’s also a violin player for the Singapore Symphony Orchestra. When not playing music, he’s off diving, and along the way bringing beautiful imagery to the world.

Tickets are on sale now from $75.   For more information: www.underwatertour.com.au

Here’s a sneak peek of what you’ll see: 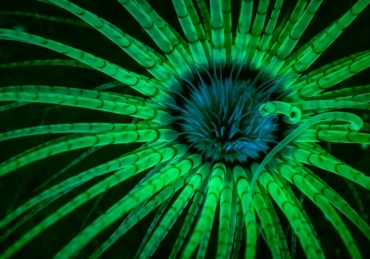 This is What Happens Inside Your Ear During A Scuba Dive!