Last week, a 4.7 meter great white was caught off of the coast of the small island country of Taiwan. Aside from its gargantuan size, it was also pregnant with pups, 14 pups to be exact.

So, what happened next? Was it tagged and released or kept alive? Of course not, it was proudly posed with, sliced open, had its young extracted, and was sold to a local taxidermist for less than $2,000 USD.

This type of behavior is far too common in many places that I travel, but it’s particularly bad in East Asia, where countries like Japan and China routinely violate international standards, overcatch, and go after species that nobody else is gunning for. That last one likely needs no explanation, as Japan’s violations within their whaling industry are extensively documented.

What’s particularly upsetting is that, at the time the shark was caught in the net, the pups were fully developed. Seeing as the great white is marked as vulnerable by the IUCN, these 14 developed sharks could have been a valuable contribution to a population under threat while also contributing to the local environment.

Unfortunately, this behavior is common in the region. Having lived and worked in Taiwan for the better part of a decade myself, especially in conservation and oceanic research, in addition to food journalism, the amount of maritime irresponsibility in the area is absolutely staggering. When it happens, people are paid off to look the other way, or it’s simply ignored and everyone moves on with their day. Sometimes on purpose, sometimes by no fault of the fisheries, but a simple lack of education about conservation.

What We Consume Eats Us, But Not Like That

When asked about the “need” for shark fin soup, several chefs, shop owners, and people who enjoy it have said that it’s “good for health,” and even gone as far as to say that their one bowl a year doesn’t hurt anything. This, however, is a mistake that we all make, and in no way localized to this region. For years, around the world, we’ve looked at our oceans as both an infinite resource as well as a place to throw our garbage where no harm is done and nobody gets hurt. The key word there, of course, is “nobody,” disregarding marine life and waiting until our species notices the damage. While this is changing slowly but surely, our appetite for seafood is killing our oceans. Coral bleaching events, species extinction, and general harm done to the oceans is, without question, accelerated by human behavior.

This isn’t some call to go vegan or shouting from a soapbox without purpose, but simply a reminder to be aware of your surroundings, both near and far. In the industry, we all know people who are surrounded by and make a living off of the ocean in various ways. If you’re into diving, you’re likely already into conservation. Where I come from in Maryland, back in America, and where I live in Taiwan, I’ve met a lot of people who make a living off of fishing, and the majority are making attempts to do it responsibly. That said, if you find a catch like this one, or one that seems too good to be true, it’s probably better to seek professional assistance, because it could be something truly special. 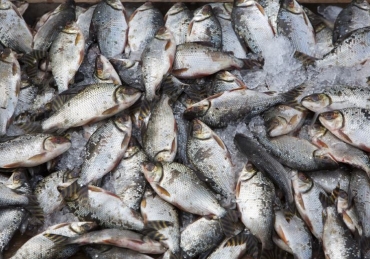