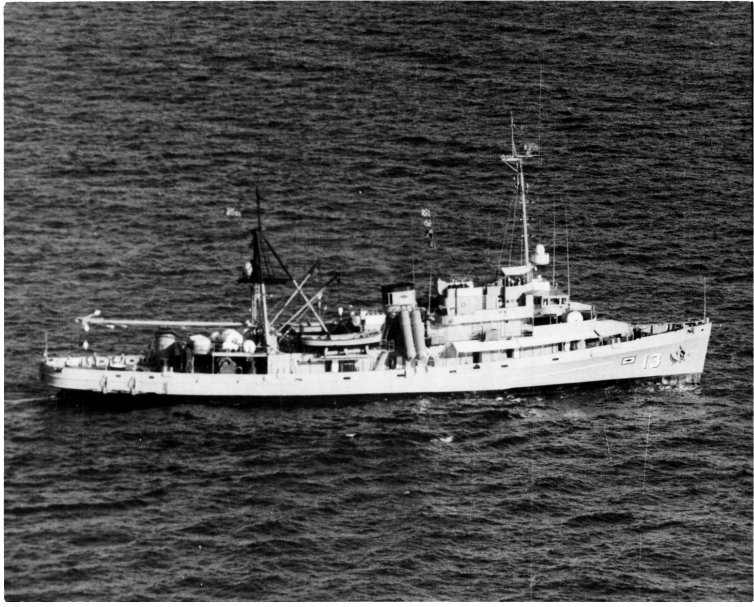 The USS Kittiwake began its service toward the end of World War II when it launched from Savannah, Georgia on the tenth of July in 1945. By October, it was headed for the Panama Canal. As a submarine rescue vessel, its assignment was to operate with Submarine Squadron 6 and assist in diving operations.

By 1950 the ship and its crew were providing divers and gear in assistance to the USS Missouri, an American battleship. Over the next few decades, the ship would make trips between Norfolk and the Mediterranean region, providing support to America and its allies through naval exercises and delivery operations. All along the way, carrying a crew of elite divers, it made underwater operations easier for the submarines to which it provided assistance.

Winding down its days in service it operated on the East Coast of the United States and in the Caribbean, at one point rescuing a number of refugees fleeing Cuba. While much of what the Kittiwake did was quite routine, its true place in history might have come when it was the ship that recovered the black box after the explosion of the Space Shuttle Challenger.

The most notable personal story to come of the Kittiwake would be when Clyde M. Pickett set a Navy deep-diving record by descending 152 meters in Panama Bay on April 21, 1948.

So in a way, its entire life had been dedicated to diving.

…and that tradition will continue forever.

When the Kittiwake’s service as an above-water vessel providing support to operations under the surface came to an end, it was decided that it would be put away in cold storage at its former port-of-call in Norfolk, Virginia. There the ship waited for years before it was taken to the Cayman Islands and scuttled to make an artificial reef in the waters off of Seven Mile Beach. The video above showcases the entire ordeal in HD, and is definitely worth a watch.

The decision was made in 2011, and the Kittiwake was back in service, so to say. When the ship was transported to Seven Mile Beach, it would be its last journey. Extensive efforts were made to make sure that all toxic materials, oil residue, and other things that would be harmful for the surrounding waters were cleared out before the ship made its final descent. It would sit upright in shallow waters as one of the most pristinely preserved shipwrecks on earth, and, because of said shallow waters, it would also be able to be accessed by snorkelers and freedivers.

Everything went according to plan. There it sat, upright and ready.

Instantly, the dive enthusiasts started pouring in. The well-preserved vessel and the artificial reef it provides are home to grouper, barracuda, turtles, eels, and a plethora of other life.

In 2017 Tropical Storm Nate struck the Caymans, and with them, the Kittiwake. The ship not only moved a massive 20 meters, but it also landed on its side closer to the wall site that locals call Sand Chute, coming close to damaging natural reefs and enraging locals. When the ship was first placed in the waters, public officials assured residents that the ship would be secure in its first location from the start. This, unfortunately, was not the case.

Shortly after the storm, divers went under to find answers to the question of why it moved. When a swell hit under the Kittiwake, the anchor chains keeping it in place snapped. More damage would have been done had the port rail not embedded itself in the sand, the only thing preventing it from sliding further.

But all is not lost…

Luckily for divers, the wreck is still there, still accessible, and just a bit tilted. But aren’t we all? It sits about six meters deeper than it did before, so it won’t prove too much of a challenge for divers of all levels who decide to visit now. In fact, since it is closer to the reef and the wall, it’s almost easier to make a day of it and just take a boat out to explore the entire area.

Now that’s turning a negative into a positive.

As you can see in the video above, the ship still sits in calm, blue waters and is full of color and life. The only downside? That means it’s still very busy. In the summer of 2018, the first since the storm, it continued to rank as one of the top dive sites in the region. The snorkelers and freedivers are still around as well, but they need to save a bit more breath and use a bit more strength to get to the site.

Popularity, of course, means book early. The Cayman Islands Tourist Administration owns the marine park surrounding the ship, and anyone who wants to visit needs a guide that has been given permission from the government. Let’s go over a few options.

Lobster Pot Dive Center offers a very personal, thorough, two-tank guided tour through the wreck area. They’ll show you the ins-and-outs, and they’re well-versed in the history as well. They also offer a tour package including the wall. Cayman University Divers offers the unique experience of having a narrated underwater tour. Twice a week, Sunset Divers offers a small group tour for divers and snorkelers, meaning you don’t have to be a diver to head out on the boat.

No matter how you get there, it’s a traveler’s favorite. Not much more on Earth could hit the history vein, the aquatic adventure nerve, and the relaxation craving at the same time. If you don’t have the Kittiwake on your bucket list, we hope that you do now.

Shearwater Perdix AI Review | All You Can Ever Wish For