It’s been almost six years since I landed in Taipei. Jobless, some cash in hand, my wife and I just kind of wanted to see what Taiwan is like. She had been once, in 2007, and I like experiencing new places by just moving to them. As it has been nearly six years, clearly we like it. Part of what’s so great about this tiny island that sits somewhere between international and invisible is that there’s always something new to discover, adventures to be had and things to see that can go unseen for years. I’ve spent shorter spans of time in larger places and felt like I had seen everything. The island of Taiwan is about the size of my home state in America, Maryland, but its inhabitants come in numbers of several million more. Even the Taipei metro area has a larger population than my entire slice of home.

Being travelers, and having a lot of friends in other countries around the region, we don’t always get to take the time to see this place we’ve based ourselves for more than half of a decade. In fact, it wasn’t until about three years in that we decided to traverse the entire parameter of the island. It was a decision that we definitely don’t regret. We found our favorite small town, Dulan, which I covered for an article in Vice, and a few other great hotspots along the way.

Taiwan, as you’ll see in the video above, doesn’t have much on its East Coast. The tiny island shaped like a sweet potato holds a lot of its action along its main highways and rail lines out west. But, on the eastern line, there’s much to behold.

This weekend, for us, it was Toucheng. I asked a coworker here at Deepblu for a fresh spot to camp out on the ocean, it was set to be a beach-worthy Saturday and Sunday, and he mentioned this town of around 30,000 people a mere three-minute train ride from Wai’ao, a popular beachfront spot for surfers, beach bums, and people who, in general, like to have a beer by water in Taiwan. I was beyond surprised. Off its coast, a Taiwanese gem called Turtle Island, and within its walls pretty much anything one could want in a beachside town.

Even the small details of what an American would consider beachside living are to be found in Toucheng. Food trucks, an ice cream parlor, places to buy wetsuits, bathing suits, inner tubes, and sunscreen, all of this quite unfamiliar in the region. While Taiwan is an island, it’s only recently growing keen on the beach. For years leisure time was an unheard of concept, as it is in much of East Asia, with long hours and long work weeks being the norm. But now, it seems that people are coming around to the concept. Surf culture was brought here by soldiers on leave from the Vietnam War fifty years ago, but now it’s slowly becoming a national pastime. 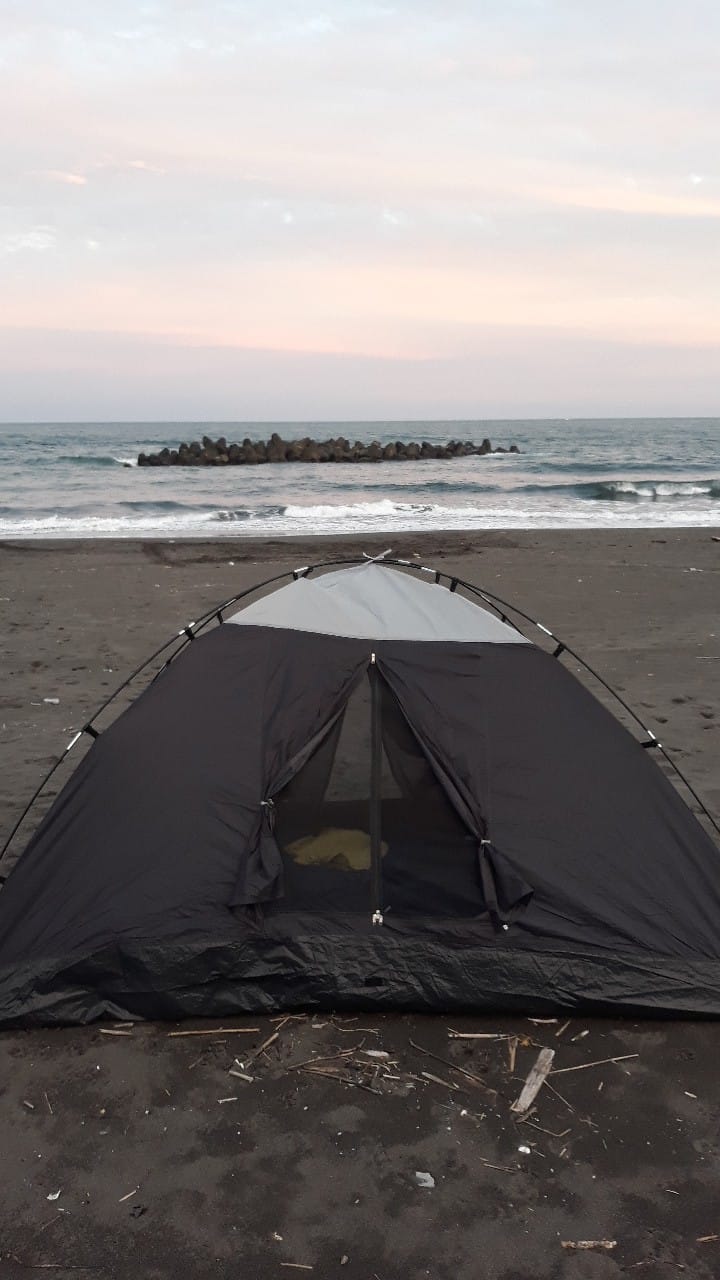 As for camping, that’s always been one of the loveliest things about the island for me. When we head out for a weekend we don’t really have to think about where we’re going to stay if we have a tent strapped to our back. If you set up on a beach, in a forest, or anywhere that isn’t bothering anyone, you’re very likely to be left alone here. In addition, during the weekends you’re free to camp out on school grounds, and most police stations outside of city centers, as well as some in, have places to set up a tent free of charge. A combination of such convenience and one of the lowest crime rates on the planet makes for a great, relaxing time pretty much anywhere you go here.

At its very core, to me, Taiwan has always been an island of relaxation, and I feel that it’s headed that way for locals as well. In a recent television news report a local station interviewed people who are going back to running the family business after getting advanced degrees, many overseas, because they’d rather have family and free time in their lives than huge salaries. I dig that, a lot.

Back to Toucheng. Another interesting thing about the town is the influence of Japanese culture. While Taiwan was a colony of Japan for quite a few decades, you don’t see it everywhere. However, here in town there’s a sense of nostalgia that is, in some ways, infiltrating the mindset. Where I live in Taipei there’s a lot more Chinese influence, for better or worse. While Chinese food is great, there’s nothing like coming to a beachside slice of paradise and getting fresh fish, and not many prepare the dish better than the Japanese. Many fisherman come through the town, which hosts one of the oldest harbors in Taiwan, and this has led to some great international dining. In recent years people from Indonesia and the Philippines have been moving to the city as well, and with time their influence is sure to become apparent.

But, what remains in touch in Toucheng is an overwhelming sense of Taiwanese identity. That sense that this place plopped in the middle of the scattered region is simultaneously accessible and hard to comprehend. Like in other cities, the night market is there, the morning greets you with fresh produce lining the streets and roosters calling on the sun, and, in general, people are happy to see you, especially if you speak a little Chinese. It’s those traits which span the whole nation and keep me tethered to this powerful yet coy rock popping out of the Pacific. That, to me, is what brings it all together. The makings of an escape, but all the convenience of being right at home. I’m looking forward to seeing what more it holds in the future.

Greenhorn’s Guide #6: How to Improve Your Buoyancy