It’s that pumpkin spice time of year. The kids are back at school, the scarves are multiplying in number, and everything that once was the sizzling surface of the summer is now strictly back to the old routine. That is, unless you’re still out there seeking thrills. For those of you who are, there’s no reason to bundle up by a fire, because there’s one burning inside of you already. Let’s check out five dives to strive for if you’re seeking autumnal bliss.

Starting off with a warm one, you don’t have to go too far to get to a tropical island, America already has a few. Spend your time relaxing on the shores like summer never ended, and getting beneath the surface like it never has to.

Sure, it’s going to be a bit cold, but with the right suit you can dive right in the middle of the northern states. In addition to having all the surrounding amenities of the world’s oceans, the Great Lakes are a, well, great place to get in if you don’t mind a chill. The shipwrecks rank among some of the best in the world.

Monterey Bay is a global tourist attraction, but very few who visit get into the bay itself. Vast kelp forests are a home for several species of marine fish and mammals, including a large number of otters and seals. The sheer numbers of marine creatures you’ll see will astound you.

Back to warmer waters, Key Largo is a great place to go shark diving when the rest of the country is out of season. If you’re looking to see turtles, that’s another safe bet in the region. In the American tropics, autumn isn’t even a word. (Okay, it is, but you won’t be feeling it.)

On the Gulf Coast of Texas sits a small island with big adventure. Popular with divers, snorkelers, wreck enthusiasts, and those who like to spearfish, South Padre Island offers year-round warm climate exploration for those who can’t keep away from the water… which is most of us! 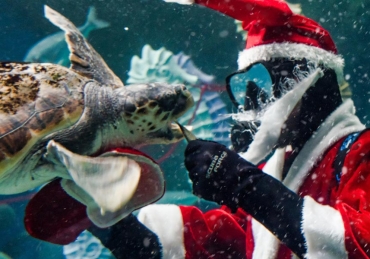 Save Our Oceans by Making Small Changes

On the Front Lines: The Green Fins’ Approach to Coral Reef Protection