There’s nowhere I’ve been, anywhere on Earth, that has made me think “congrats, you’ve made it here” more than the island of Borneo. The island is massive, one of the biggest on Earth, and divided between the countries of Malaysia, Indonesia, and Brunei. More importantly, it’s home to over one hundred endemic species in its jungles, mountains, valleys, and waters.

Many come for the proboscis monkeys, which co-exist with the local orangutangs. They’re a staple of every tourist item sold in the northern regions near Kota Kinabalu, and they really stand out…

Other than the cool looking monkeys, there are several more reasons to visit this equatorial paradise. Let’s do a run down.

There’s Travel for Everyone, With Any Style, on Any Budget

From personal experience, my friends and I travel differently. As a travel writer, I don’t typically allow myself to ever fully be off; that said, when one of my friends booked a huge house with a pool at a beachside resort and said she was paying for everything, I thought I’d give it a try. It was nice. Full breakfast, with both Western and Malaysian options, provided by friendly staff in a near-ideal environment for most.

The next night, much to the dismay of my friend, I went off and booked a little shack for three bucks a night, U.S. dollars. I got right into the muck of things, drank with locals, and my wife and I enjoyed a night market seafood feast of six king prawns, six crabs, a half-kilo of mussels, and steamed clams for about $20USD.

As on Earth, there’s more sea than land, and just as famous as its jungles are its waters. Borneo is full of shapes and colors that cannot be found anywhere else on Earth. Truly, it’s one of the last total mysteries of the world. One of the most famous inhabitants of the waters, the Borneo shark, is found only around the Sarawak region. Like the proboscis monkey, it’s not often kept in captivity, so if you want to see it you’ll have to come to it.

In a rainforest that’s over 130 million years old, it’s to be expected that the area would be teeming with life. What’s astonishing is that, while the rhinos, orangutans, and other large forest dwellers are quite impressive, the trees have also made a name for themselves… all 750 species of them. Compare that to the 700 species in all of America, and let it sink in. The forests play shelter during hikes on rainy days, and while I’d recommend your best rain jacket, you might find yourself at home with hornbills of the forest.

Sipadan is a very small island jetting out on the border between the Malaysian and Indonesian territories of Borneo. In fact, it’s subject to a territorial dispute, but the over four hundred species of fish and equal numbers of coral to match don’t care about that. Spend your days floating at over a dozen popular dive spots with clear visibility, and as a bonus you’re off of the main island, for maximum relaxation.

Another spectacular thing about this region is that both hawksbill and green turtles come here to nest. As far as marine life goes, this small patch of land rivals the Galapagos Islands.

No matter where you find yourself around Borneo, you’re certainly going to enjoy it. From the top of the island to the bottom of its waters, there’s much to be discovered. Explore around, get some advice from Planet Deepblu, and stay tuned here for more tips on traveling the big, wet world we live in. 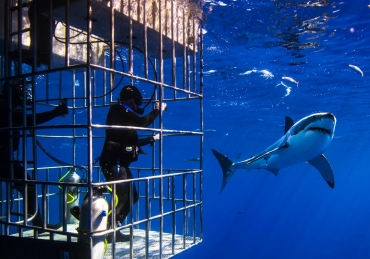