“Go to Indonesia and get certified,” it’s the bucket list cry of many from Australia and Europe, and with good reason. The country simply sells itself. In fact, it sells itself so well that for a time the tourism board only came up with “Visit Indonesia” as a slogan for the industry. When it came time to replace it, a new campaign was launched… “Wonderful Indonesia.”

Basically, the place needs no introduction. From Bali to Bandung, Lombok to Komodo, and everywhere in-between, Indonesia, the fourth most populous nation on Earth, is a place which captures the imagination of the Southeast Asia-faring world and never lets it go. In fact, with thousands of islands, there’s little chance you’ll see it all.

But there are things you might not know about it.

It’s One of 17 “Megadiverse” Countries for Wildlife

Indonesia hosts a variety of wildlife so massive that it’s in the ranks of countries like Brazil, Australia, and China for scoping out species. In fact, it holds one of the highest numbers of unique animals as well. The Komodo Dragon is likely the most well-known of the bunch, but the islands also host the Sumatran Tiger, Javan Rhinoceros, and Anoa along with a plethora of others.

The Islands Have 139 Volcanoes

There’s no need to fear, this is only the third highest number of any area on Earth, and many of them are scalable. Down for a nice, warm walk up a hot rock? Indonesia is the place for you. In fact, there’s one volcano, Banua Wuhu, where you can take a crystal-clear dive in its crater.

The Country Stretches the Length of England to Iran

That’s really, really long. Throughout it there are plenty of dive spots to check out, far too many to fit here, but luckily, they’re all over on Planet Deepblu. Don’t see one? You’re in luck! You can add your own personal favorite to the map.

It’s A Great Spot to get Coastal

We’re guessing that if you’re reading this, you like water. We are, after all, Deepblu. You’ll probably find yourself somewhere along the 54,716km of coastline within the nation’s boundaries. Likely off of the coasts, in the waters, as well.

It’s One of the most Instagrammed Places on Earth

In fact, it’s capital, Jakarta, is the most Instagrammed city. There’s so much beauty to share in the country that, with hundreds of millions of citizens and more than a few million more coming in frequently, it only makes sense that it has taken a place as one of the most shared places on social media.

Learn More About Diving in Indonesia 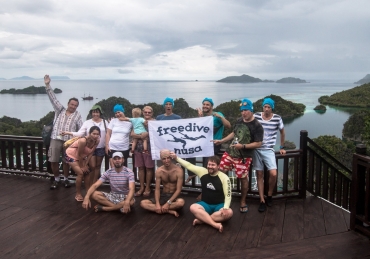