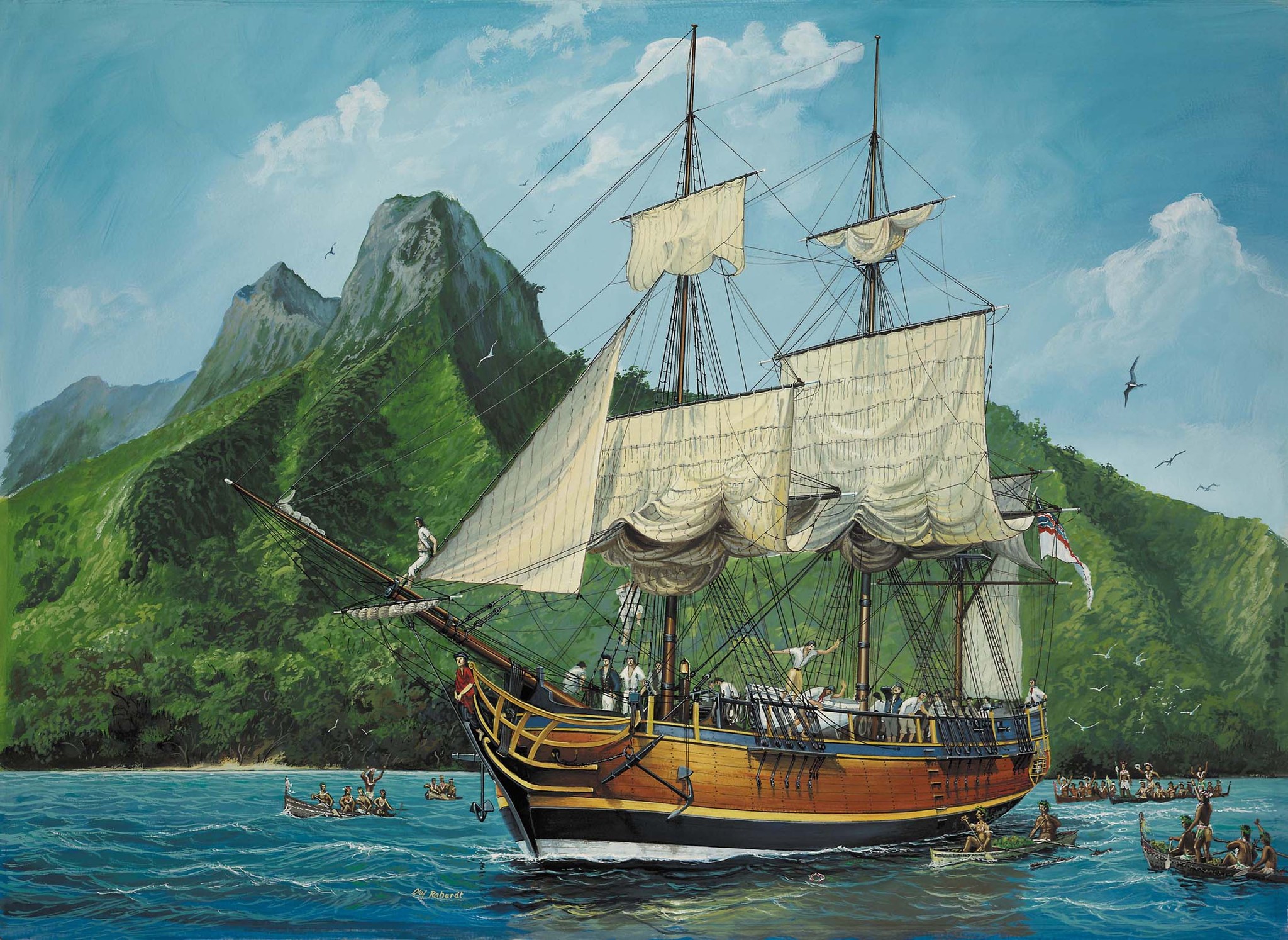 Lightning, as the old saying goes, never strikes the same place twice. This saying, however, is simply not a truth. Storm observers the world over have witnessed the phenomenon countless numbers of times. It’s rare, that bolt of electricity hitting the same spot, or two similar bolts anyway. What’s even more rare? The same ship sinking twice, in two different locations, on opposite ends of the globe. Believe it or not, it has happened.

Here’s a bit of history.

The HMS Bounty launched in 1784 as a private merchant ship called the Bethia. Just three years after launch it was purchased by the Royal Navy and renamed. Three years after that it was burned by mutineers, and it went to the bottom of the sea. A lot happened in between.

The Bounty was a strange ship for purchase by the navy, a relative runt for the type of work normally done in the name of the throne, but it was just the right size to run a special mission for King George III and it had the right rigging to withstand the currents of where it was headed, so it would do. Why such a special trip? Well, England needed some breadfruits from Tahiti. Who doesn’t?

So it was purchased, and it set sail with the colors of the land flying from its mast. But as time went on the mission started to seem like a fruitless journey to the men on board. It had been assigned a crew of 46, the two most important being William Bligh, the commander of the ship, and Fletcher Christian, the man who led the mutiny to bring it down.

The bounty spent ten tumultuous months at sea, and there were many power struggles, one of which culminated in the demotion of a Sailing Master, who was replaced by the popular Fletcher Christian. Aboard the ship there was whisper of mutiny, as the commander and the crew had different ideas as to the direction in which the ship should be headed and weather was a factor in both direction and attitude. When the ship finally arrived, it spent five months docked in Tahiti collecting over a thousand breadfruits. The men of the ship stayed ashore, and some got acquainted with the locals, tattooing themselves with their designs and learning the culture. Some, including Christian, even ended up marrying while in Tahiti. Five months was a long time in those days. 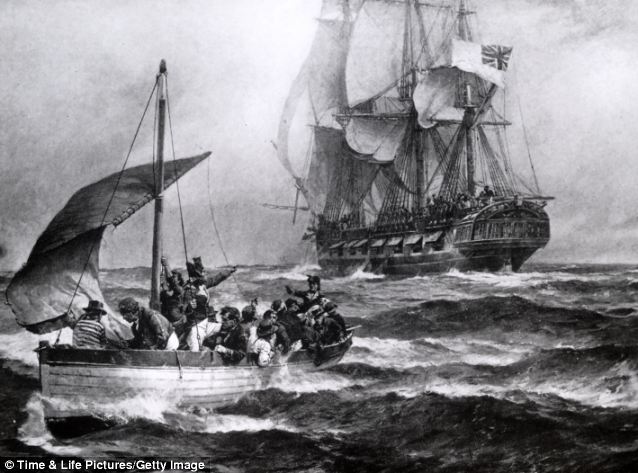 William Bligh and his loyalists are expelled from the ship. Image Copyright Time and Life Pictures.

It was on the way back, in April of 1789, that mutiny finally occurred. Bligh and his loyalists were purged from the ship into the ship’s boat and sent away, and the mutineers set course for Tubuai. Knowing that after a mutiny on a royal ship they’d no longer be able to go back to England, they planned on settling there; however, the natives had a different idea. After battle and bloodshed, the ship decided to return to Tahiti, a more familiar place where they knew they’d be welcomed.

But the calm didn’t last for long.

In late 1790 a royal ship called HMS Pandora set out to find the mutineers and bring them to justice in England. They would be tried in a court martial and, if found guilty, imprisoned or killed. Arriving in early 1791, the crew of Pandora captured fourteen of the Bounty’s men, and they were kept in a makeshift prison in the ship’s hold until later that year when Pandora crashed and sank at the Great Barrier Reef. Four of them were lost at sea, the other ten escaped what they had called “Pandora’s Box.”

But one man was missing from that brig to begin with… Fletcher Christian. Knowing that the Royal Navy would soon be in pursuit of him and his crew, he set sail with a group of Englishmen and Tahitians to evade them. Leaving behind the soon-to-be-captured crew who decided to stay, they made the choice to land on the Pitcairn Islands, with a hunch that the navy had misplaced them on their maps. After time, they settled there, brought the livestock and provisions off of the Bounty, and began to live on the land.

As for the ship, well, it was what the Royal Navy was after. Having removed everything from it, Fletcher Christian set it ablaze in the current Bounty Bay on the 23rd of January in 1790, and went on in peace. By the time anyone caught up with the mutineers it was 1808, when an American ship landed on the island. The one remaining Englishman on the island went by the name John Adams, and he told them Christian had been murdered, although it’s been rumored he escaped, knowing that he was still a wanted man.

Fletcher Christian had one son, Thursday October Christian, given the name because, in Christian’s words, he wanted his son to have “no name that will remind me of England.” Thursday, wanting to see his father’s Tahiti, died shortly after arriving there. Having been a first-born Pitcairn Islander, he had no immunity to the diseases of the outside world.

The legend of the Bounty lasted for centuries, and in 1962 it was brought back to life in replica form to be used in Mutiny on the Bounty, a film starring Marlon Brando as chief mutineer Fletcher Christian. It was the first accurate historical replica used on screen, and during shooting Brando himself requested that it not be burned, noting its historical significance. This, however, sealed a far more horrible fate for the ship in the long-run. 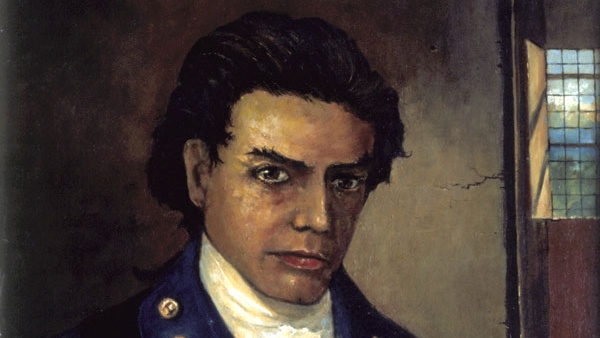 While the ship was made to historical accuracy, Brando was a bad choice for Christian, pictured above. Oh, 1960’s Hollywood, you wild card.

In 1983 the ship was used in Yellowbeard, a comedy written by and starring Graham Chapman of Monty Python. In 1989, it made a last appearance in a feature film in Treasure Island, starring Charlton Heston and Christian Bale. After good wear-and-tear it was donated to Fall River Chamber Foundation and used for educational purposes. When it became too much of a burden it was passed off, time and time again, being used once in 2005 to film pornography.

The restoration and changing-of-hands went on for years, until the ship was part of a promotional tour, even being taken back to Tahiti for a promotional tour. Afterward, it sailed up the East Coast of the United States and docked in Maine. 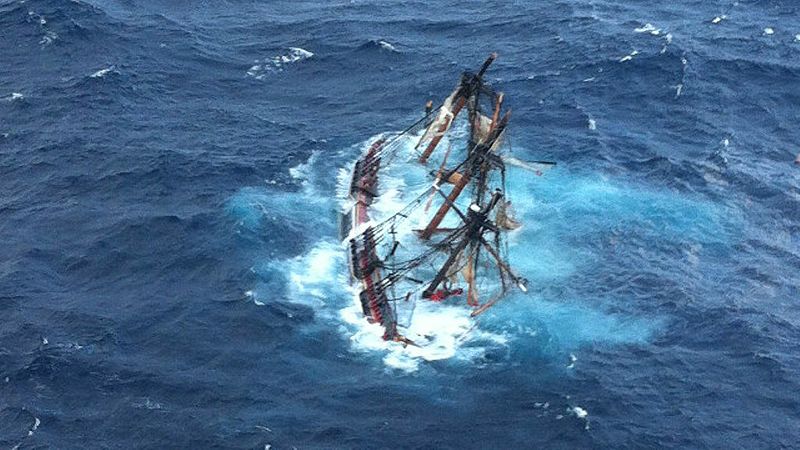 The Bounty, a reconstruction of the HMS Bounty, sinking in 2012. US Coast Guard Image.

On October 25, 2012, the Bounty left on a course to New York City with the eventual goal of docking in Saint Petersburg, Florida. Encountering Hurricane Sandy, it sent out a signal to the Coast Guard that it had begun taking on water. Shortly after the initial signal, the crew reported that they had lost power and were prepared to abandon ship. They managed to struggle and maintain the ship overnight, with a midnight operation by the Coast Guard proving fruitless in securing their location. By morning, when it was spotted, it was too late for a full rescue mission. The rescuing aircraft dropped rafts and supplies but, being low on fuel, had to leave with rescuers aboard. The crew of the Bounty was left to fend for themselves. For a mission where they had decided to abandon ship far too late, it’s considered a small miracle in the seafaring community that fourteen members of the Bounty’s crew survived, with two members missing.

Captain Robert Walbridge went down with the ship and was never found.

The other missing crewmember, Claudene Christian, descendent of Fletcher Christian, was found dead at the age of 42.

Plenty More Fish in the Sea? Sustainable Seafood and Where to Find It

Who is the Stephen Hawking of the Sea? 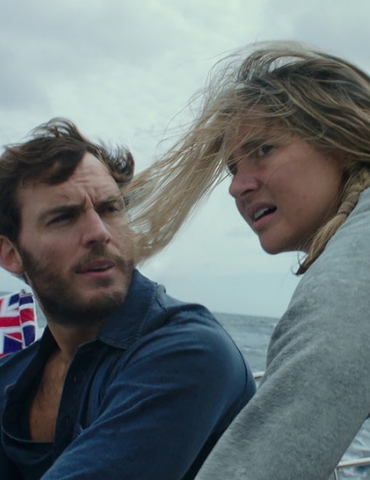 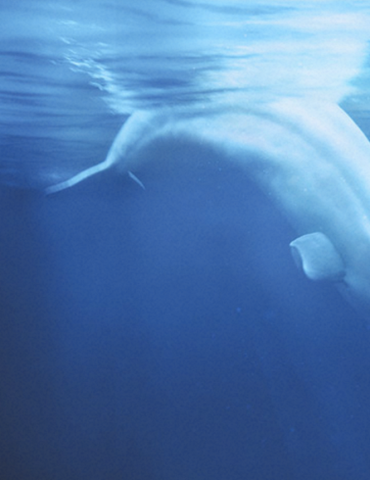 Must-Watch Netflix Documentaries About The Ocean 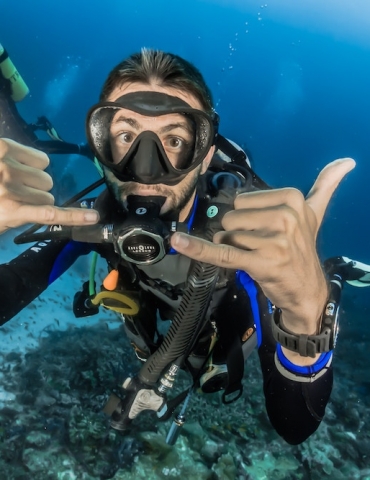 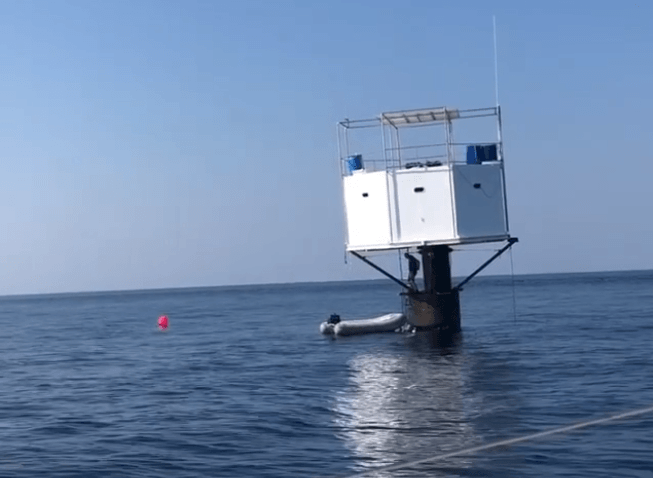