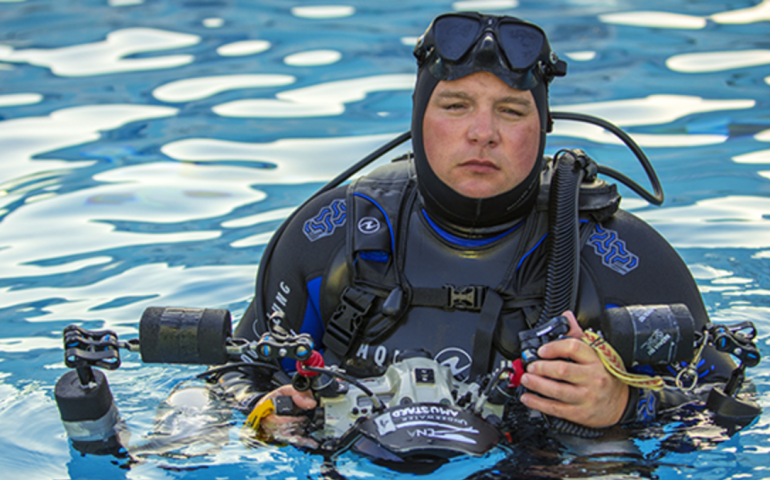 Dr. Mustard is famous not only for his stunning underwater images but also because he has shown an enthusiasm for sharing the techniques he uses to capture them, organizing workshops and writing and co-authoring numerous underwater photography books. His most recent title, Underwater Photography Masterclass, has been universally praised and is widely regarded as one of the most influential books on underwater photography and a must-read for anyone looking to improve their techniques.

Dr. Mustard has collaborated with Deepblu as a pilot tester for the original COSMIQ Dive Computer and as a judge for the Deepblu Underwater Video Competition in 2016. You’ll find some of his work in his Deepblu logs recorded at the Garden of Eden Cenote, the Carwash Cenote, and the Hammerhead Sand Bank.

We hope you enjoy this interview with Dr. Alex Mustard, shot in Bimini, Bahamas. The transcript is below.

What is your greatest accomplishment?

Like most photographers, I’d say that I hope that my greatest achievements are still to come. You’re always more excited about what you’re going to do then what you have done. But if I cast my mind back over the last couple of years, the thing I’m most excited about is my new book, Underwater Photography Masterclass, which has been really enthusiastically accepted by the underwater photography community. I see the lessons of that book coming back to me in the pictures that I see people taking now on social media. It was a lot of work but is something that I am really proud of.

Has being a marine biologist contributed to your success?

There are two factors here. The first is, as in any type of photography, knowledge of your subject is always going to help your pictures. Being a marine biologist helps me get the timing of my trips right, spot behaviour, learn to find animals. It helps every day.

But also, coming from an academic background I don’t feel I have anything to prove. A lot of photographers as they learn more and more about underwater photography, they want to find rarer and rarer species in order to impress their friends. Whereas, obviously, with a PHD in marine biology, I don’t have to worry too much about that.

So that allows me to focus on the image. I’m just as happy photographing something that’s really common as something that is really rare. The importance for me is getting that powerful image that will connect with people.

What motivates you to enter the big nature and wildlife competitions?

What are the differences between photography underwater and on land?

What is it like to be a competition judge?

I’ve been judging major underwater photography competitions for at least the last fifteen years. Rather unusually among the sort of people who are invited to be judges in these competitions, I am one of the very few who actively enters competitions, too. Unfortunately, not the ones I’m asked to judge, that would be perhaps too easy (laughs).

That means I really take the judging very seriously and I judge competitions as I wish my own would be judged. It doesn’t mean I’m always going to pick the same picture that you want, but it means I’ll always put in as much effort as I can. I think it’s important that judges meet face-to-face and can really discuss images rather than simply choose one quickly online without giving it a lot of thought. I also think it’s important that if you pay to enter a competition, all of the main judges should see every picture that’s entered.

That’s something we’ve tried to do with Underwater Photographer of the Year, where all the judges come together for two days. All of the judges look at all of the pictures at the same time and can discuss them. I will very often change my opinion on a picture based on the passion and the arguments of another judge for that shot. I think that’s a really important aspect of being a good judge. Not only knowing your own mind and knowing what you feel makes a prize-winning picture, but being willing to listen to other judges and if another judge makes compelling reasons to choose another picture, changing your choices, too.

What brings you back to your favorite dive destinations?

So, I run annual workshops in places like the Cayman islands and the Red Sea. And those aren’t destinations that I really need to go back to for my own photography again and again but I know that I can run really nice workshops in those destinations because I know the diving inside and out and I don’t have that great desire to get my own pictures there, so I can always put the needs of the workshops first.

By far the most important thing is to get out there and shoot. You don’t take good underwater pictures sitting around at home or sitting on the dive boat talking to your friends. Get in the water and give your photography your attention and concentrate on what you’re doing. I often joke at the workshops that we put the ‘work’ into ‘workshops’. And I really believe you don’t get great pictures unless you put the work in.

With that said, it’s really important when you’re not diving, and we don’t all get to dive all the time, is to stay an underwater photographer every day of the year even if you’re not diving for six months. Look at underwater pictures online. Try and absorb those influences from them and incorporate that in your pictures next time you go diving.

We all take ideas all the time as photographers, both from underwater pictures and land pictures. The more of those ideas you can soak up, the more ideas next time you’re looking through your camera ready to shoot your subject. It’s those ideas that will mark you out as a photographer. 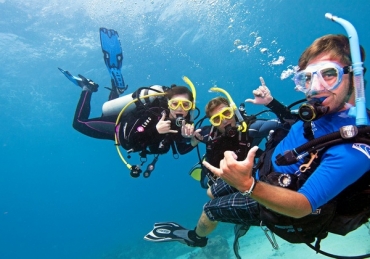 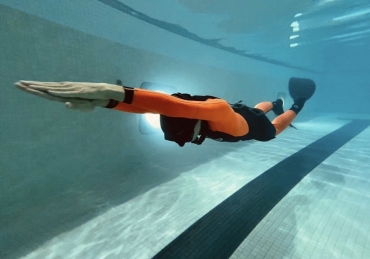 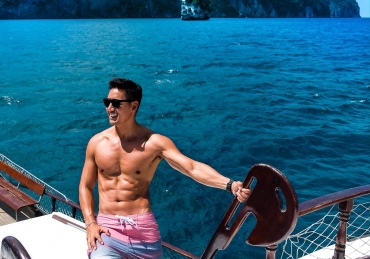